I WILL PERSIST UNTIL I SUCCEED 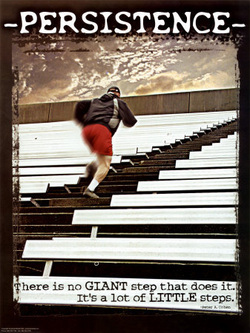 What happens when the road gets tough?  REAL TALK, what is your IQ? What is your I QUIT point?  How many times will you allow yourself to fail in order to succeed? Most successful people will tell you the same thing, QUITTING IS NOT AN OPTION! Quoting one of my favorite mentors Jim Rohn said, “How long should you try? Until.”  What most people don’t realize is that right before your breakthrough there will be a test.  A test of your ability to stay. A test of character and strength.  Will you stop just short of your goal? Or, will you PRESS THROUGH UNTIL?I am reminded of a story shared by Napoleon Hill in “Think and Grow Rich”, the man that stopped three feet from gold, “One of the most common causes of failure is the habit of quitting when one is overtaken by temporary defeat…THREE FEET FROM GOLD
R. U. Darby was caught by the “gold fever” in the gold-rush days, and went west to DIG AND GROW RICH…He staked a claim and went to work with pick and shovel. The going was hard, but his lust for gold was definite. After weeks of labor, he was rewarded by the  discovery of the shining ore. He needed machinery to bring the ore to the surface. Quietly, he covered up the mine, retraced his footsteps to his home in Williamsburg, Maryland, told his relatives and a few neighbors of the “strike.” They got together money for the needed machinery, had it shipped. The uncle and Darby went back to work the mine.The first car of ore was mined, and shipped to a smelter. The returns proved they had one of the richest mines in Colorado! A few more cars of that ore would clear the debts. Then would come the big killing in profits.

Down went the drills! Up went the hopes of Darby and Uncle! Then something happened! The vein of gold ore disappeared! They had come to the end of the rainbow, and the pot of gold was no longer there! They drilled on, desperately trying to pick up the vein again–all to no avail.

Finally, they decided to QUIT.

They sold the machinery to a junk man for a few hundred dollars, and took the train back home. Some “junk” men are dumb, but not this one! He called in a mining engineer to look at the mine and do a little calculating. The engineer advised that the project had failed, because the owners were not familiar with “fault lines.” His calculations showed that the vein would be found JUST THREE FEET FROM WHERE THE DARBYS HAD STOPPED DRILLING! That is exactly where it was found!”

Today I offer to you to pledge to yourself…TO PERSIST…UNTIL…PERSIST UNTIL YOU SUCCEED!

“I will persist until I succeed” by Og Mandinoby

I will persist until I succeed.In the Orient young bulls are tested for the fight arena in a certain manner. Each is brought to the ring and allowed to attack a picador who pricks them with a lance. The bravery of each bull is then rated with care according to the number of times he demonstrates his willingness to charge in spite of the sting of the blade. Henceforth will I recognize that each day I am tested by life in like manner. If I persist, if I continue to try, if I continue to charge forward, I will succeed.I will persist until I succeed.I was not delivered unto this world in defeat, nor does failure course in my veins. I am not a sheep waiting to be prodded by my shepherd. I am a lion and I refuse to talk, to walk, to sleep with the sheep. I will hear not those who weep and complain, for their disease is contagious. Let them join the sheep. The slaughterhouse of failure is not my destiny.

The prizes of life are at the end of each journey, not near the beginning; and it is not given to me to know how many steps are necessary in order to reach my goal. Failure I may still encounter at the thousandth step, yet success hides behind the next bend in the road. Never will I know how close it lies unless I turn the corner.

Always will I take another step. If that is of no avail I will take another, and yet another. In truth, one step at a time is not too difficult.

Henceforth, I will consider each day’s effort as but one blow of my blade against a mighty oak. The first blow may cause not a tremor in the wood, nor the second, nor the third. Each blow, of itself, may be trifling and seem of no consequence. Yet from childish swipes the oak will eventually tumble. So it will be with my efforts of today.

I will be liken to the rain drop which washes away the mountain; the ant who devours a tiger; the star which brightens the earth; the slave who builds a pyramid. I will build my castle one brick at a time for I know that small attempts, repeated, will complete any undertaking.

I will never consider defeat and I will remove from my vocabulary such words and phrases as quit, cannot, unable, impossible, out of the question, improbable, failure, unworkable, hopeless and retreat; for they are the words of fools. I will avoid despair but if this disease of the mind should infect me then I will work on in despair. I will toil and I will endure. I will ignore the obstacles at my feet and keep mine eyes on the goals above my head, for I know that where dry desert ends, green grass grows.

I will remember the ancient law of averages and I will bend it to my good. I will persist with knowledge that each failure to sell will increase my chance for success at the next attempt. Each nay I hear will bring me closer to the sound of yea. Each frown I meet only prepares me for the smile to come. Each misfortune I encounter will carry in it the seed of tomorrow’s good luck. I must have the night to appreciate the day. I must fail often to succeed only once.

I will try, and try, and try again. Each obstacle I will consider as a mere detour to my goal and a challenge to my profession. I will persist and develop my skills as the mariner develops his, by learning to ride out the wrath of each storm.

Henceforth, I will learn and apply another secret of those who excel in my work. When each day is ended, not regarding whether it has been a success or failure, I will attempt to achieve one more sale. When my thoughts beckon my tired body homeward I will resist the temptation to depart. I will try again. I will make one more attempt to close with victory, and if that fails I will make another. Never will I allow any day to end in failure. Thus will I plant the seed of tomorrow’s success and gain an insurmountable advantage over those who cease their labor at a prescribed time. When others cease their struggle, then mine will begin, and my harvest will be full.

Nor will I allow yesterday’s success to lull me into today’s complacency, for this is the great foundation of failure. I will forget the happenings of the day that is gone, whether they were good or bad, and greet the new sun with confidence that this will be the best day of my life.

So long as there is breath in me, that long will I persist. For now I know one of the greatest principles of success; if I persist long enough I will win.